After some medical setbacks with the Sphynx we decided to orient ourselves to another cat breed with a higher life expectancy and without serious health problems.

The desire to have a young lively kitten in the house was very big after the death of Rania, our Sphynx. It was suddenly so quiet with only three cats at home.

Searching for a healthy cat breed with a high life expectancy together with a super social and adventurous character, we came across the Egyptian Mau.
When we could not find suitable kittens in our area, we were orientating a bit in America, and now we have 3 Egyptian Maus.
Of course, we are getting a bit kitten broody and we have revived our cattery name “Fatal Attraction” to what is now “Fatal Attraction Egyptian Mau” 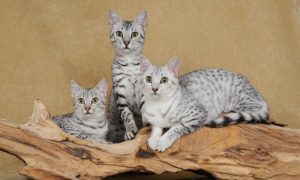 The Egyptian Mau dates back to ancient Egypt, about 4000 years back, where he was honored as a God.
He was seen as a kind of protector of the people because he killed snakes and mice who ate the grain. When someone treated a cat badly or worse, he would recieve the death penalty. The Mau was a member of the family, got given good food and had a high reputation.

In the mid-19th century, a Russian princess met the Mau in Egypt and was fascinated by it. She took 3 Mau’s home and in 1953 and 1954 the first litters were born.
When she moved to America in 1956, she took her own bred Egyptian Maus with her, who represented her cattery Fatima.
In 1958 the Egyptian Mau was accepted as a race.

The Egyptian Mau has its own personality, is wilful, but very social and friendly.
He is very much concerned with his family and other animals within the family. He is very faithful and affectionate.
The Mau is lively and likes to walk around with his toys.
He is curious and interferes with everything. It is an intelligent, temperamental cat with a unique character and turns out to be a wonderful inmate. It’s a sporty and agile cat.
The Mau has a melodious voice, especially when they’re hungry. He has an irresistible appeal through his beautiful spotted coat and his temperamental, sweet character.
The most distinct features of the Mau are the irregularly spread spots in the fur. He is the only breed, with such a natural patch pattern. On his forehead he has a tabby pattern with a distinct M, and on the cheeks he has a double mascara line.
The Egyptian Mau has an exotic look because of it’s its spotted coat, its elegant feline movements and, above all, its slightly surprised expression.
The Mau needs little care, but attention is especially needed. 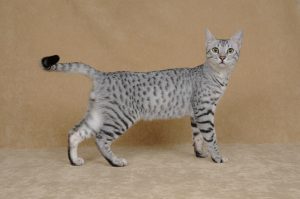